As a keen follower of international solar car racing, it’s interesting to explore the so-called “Gender-Equality Paradox” in Science, Technology, Engineering, and Mathematics (see Stoet and Geary, 2018) as it relates to solar car teams – although I realise that this is a controversial subject.

In countries with high gender equality, such as Sweden, female participation in the STEM professions is paradoxically low. In part, this seems to be due to the fact that young women with STEM skills and interests often have other skills and interests as well, and these drive their educational and career choices (and within STEM fields, women appear to preferentially choose medicine over engineering). One can hardly force women to make other choices, though!

Solar car racing is in some ways engineering at its most intense – a difficult challenge requiring a substantial sacrifice of free time (much like an engineering start-up company). In the chart below, I plot the UN Gender Inequality Index for various countries against the average percentage of women in the engineering segment of solar car teams from those countries (I include team leaders in the count, but not dedicated media or public relations personnel). The colour of the dots for each nation indicate whether team leaders are mostly women (pink) or mostly men (blue).

The results are not statistically very significant (p = 0.05 and 0.09 for the two coefficients at the individual team level), but there is an interesting inverted parabolic fit here. For countries with high gender equality (Sweden, Belgium, Germany, and the Netherlands), only about 6.7% of the engineering segment of solar car teams is female. This is compared to 11.3% for other countries. On the other hand, Germany and the Netherlands do have mostly female team leaders.

In part, these results may reflect the fact that when a team attempts to make an optimum assignment of people to roles, the best people to carry out public relations and leadership roles are often the female team members (some people have suggested psychometric reasons for this). In fact, women are exactly twice as likely to be team leaders as you would expect based on the composition of the engineering segment of teams.

Obviously this small-scale study doesn’t settle anything, but it does raise some interesting questions for further investigation. And, of course, it would be fatal to believe that the man or woman building the car’s suspension was doing a more worthwhile job than the man or woman raising the sponsorship money that the team needs to survive. Success requires being good at everything, and that requires a diverse team.

Edit: This analysis may have missed a few women who were not included on team web pages.

Among men, financial stress and poor health act in the same way as for women. In terms of marital status, however, it is separated men who are the least happy. Male happiness is also closely tied to employment status, with unemployed (and, to a lesser extent, self-employed) men reporting more unhappiness.

Lately I’ve been exploring demographic data related to women’s health. Among other things, this involved looking at the Australian data in the World Values Survey, which includes a self-reported measure of health. For women, this depends on a number of other variables, including age:

For men, the age effect is weaker:

Presumably, this is because male health problems are more likely to be fatal, which is why there is an excess of women amongst the elderly, as indicated by Australian census data:

A recent University of Michigan study of preferred public female dress in Muslim countries has some fascinating findings. Men and women from seven countries were asked to identify the most appropriate female dress, from six options. The mosaic plot above is my visualisation of the results. The images are the ones used in the study, scaled so that areas reflect percentages of responses.

See here for the full report and here for an interview with lead researcher Mansoor Moaddel. Thanks to Thumbs Up Viz for pointing out this study.

The Cavendish Laboratory at Cambridge has had more than its fair share of major scientific discoveries. In this old building (which the Laboratory no longer occupies) worked James Clerk Maxwell, Lord Rayleigh, J. J. Thomson, Ernest Rutherford, Lawrence Bragg, James Watson, and Francis Crick, among others. Their discoveries included the electron, the neutron, and the structure of DNA. I’ve always wondered: did the genius ooze into the walls? Would I become a better scientist if I could sleep a night inside the old Cavendish building? Or would I see ghosts performing experiments?

The Cavendish opened on 16th June 1874, receiving a write-up in the (then new) journal Nature (10: 139–142, 25 June). A description by William Garnett is also available here. The inscription “Magna opera Domini exquisita in omnes voluntates ejus” was placed over the doors. This is taken from Psalm 110:2 in the Clementine Vulgate (Psalm 111:2 in Protestant Bibles). The English version, “The works of the Lord are great, sought out of all them that have pleasure therein,” was placed over the doors of the Laboratory’s new building.

In 1882 the Cavendish accepted women on equal terms with men, although the University itself did not award degrees to women until 1948. Eleanor Sidgwick was the first woman to work at the Cavendish (1880–1882). Elsa Neumann joined in 1899, and Katharine Burr Blodgett in 1924. 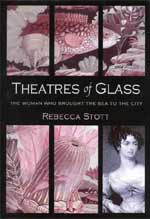 Theatres of Glass by Rebecca Stott (2003)

I recently read Theatres of Glass: The Woman who Brought the Sea to the City by Rebecca Stott. The book tells the story of Anna Thynne, wife of the Reverend Lord John Thynne, who was Sub-Dean of Westminster Abbey from 1831 to 1881.

Anna with her daughters Selina and Emily

Beginning in 1846, when she took her children on a holiday to Devonshire, Anna Thynne developed the marine aquarium (realising that constant aeration of the water was required) and studied stony corals such as Caryophyllia smithii, publishing an article with the deeply religious zoologist Philip Gosse. 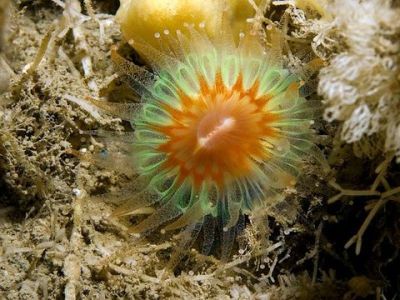 Stott quotes Tennyson’s The Princess as an indication of the Victorian mania for collection:

“And me that morning Walter showed the house,
Greek, set with busts: from vases in the hall
Flowers of all heavens, and lovelier than their names,
Grew side by side; and on the pavement lay
Carved stones of the Abbey-ruin in the park,
Huge Ammonites, and the first bones of Time;
And on the tables every clime and age
Jumbled together; celts and calumets,
Claymore and snowshoe, toys in lava, fans
Of sandal, amber, ancient rosaries,
Laborious orient ivory sphere in sphere,
The cursed Malayan crease, and battle-clubs
From the isles of palm: and higher on the walls,
Betwixt the monstrous horns of elk and deer,
His own forefathers’ arms and armour hung.”

Indeed, as Stott explains, Anna Thynne’s work (together with the book The Aquarium: an unveiling of the wonders of the deep sea by Gosse) helped extend that mania to aquaria as well. My understanding of the chronology is this:

An illustration from Gosse’s book, which appears on the dust cover of Stott’s

Overall, a very enjoyable book, about a forgotten heroine of science. I didn’t quite feel I’d gotten inside Anna’s head, but that is probably because the limited range of source material often forces Stott to speculate. Anna’s role is weakened a little by the fact that Gosse was unaware of her when he wrote his book in 1854, although he lists her as one of three pioneers in the second edition (and quotes the sentence “The individual to whom is due the merit of having introduced marine vivaria into London is Mrs. Thynne,” which justifies the carefully chosen subtitle of Stott’s book).

Also, I was perhaps subconsciously expecting some of the flavour of Barchester Towers, in a book about the wife of a Sub-Dean. No doubt that is the wrong way to think about Anna Thynne, but Stott does not give a strong alternative. I can’t help wish that more source material existed. I would have liked some colour plates in the book too.