A few people have commented on my rather tongue-in-cheek post about solar car racing and beer. I don’t think the correlation there was actually spurious – there really is a tradition of excellent engineering education in the beer-producing areas of Europe, and both the beer production and the approach to engineering education have been exported around the world.

But lest I be accused of some kind of pro-beer bias, the chart below shows national wine consumption (consumption this time, not production) compared to the date of the oldest university in the country (excluding universities less than a century old). Here we have universities (in the modern sense of the word) growing out of the wine-drinking areas of Europe, beginning with the University of Bologna. Once again, I think the data can be understood as a case of parallel exports: 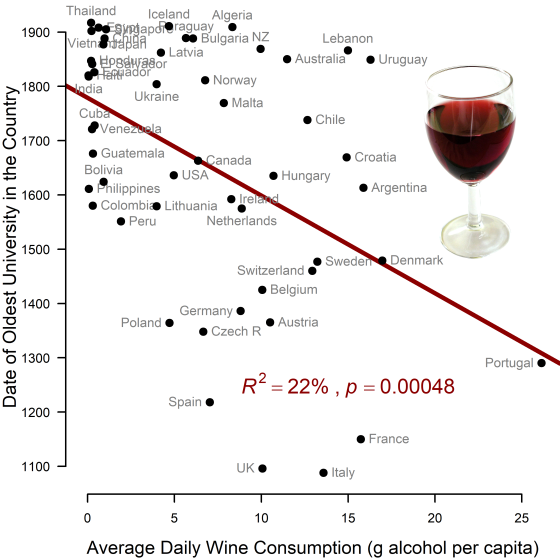 I’m sure that everyone is familiar with the protests at The Evergreen State College in Washington State, which were triggered when biology professor Bret Weinstein objected to the 2017 version of a college event called “Day of Absence.” This event was described by organisers with the words “We are having people of color stay on campus and we are encouraging white staff, faculty, and students to go off campus in order to make the space at Evergreen more centered around people of color.” Weinstein, who is Jewish, objected to this in an internal email (using what seems to me very polite language), noting that “On a college campus, one’s right to speak – or to be – must never be based on skin color.” No doubt he saw some disturbing historical precedents.

Protests snowballed, however, taking a rather anti-White, anti-Jewish, anti-Asian, and anti-Science turn. One of the activists suggested that “Hopefully, long-term we can just weed out people like Bret.” It’s not clear to me what “people like Bret” means. I do note, however, that protestors vandalised both the college’s natural history museum and its scientific computing facilities, so I suspect that not only Weinstein, but scientists in general, were a target. That seems an unfortunate situation in an educational institution (even one that accepts 98.9% of applicants). No doubt there’s more here than meets the eye.

I have pointed out before that I am a child of the American post-Sputnik boom in Science, Technology, Engineering and Mathematics (STEM) education, which spread to other countries through books like the ones below, but which faded away in the US over the decades that followed.

I have also previously written about the Times Higher Education “top 100” university list for Engineering and Technology and its relationship to solar-car racing. The USA has 31 of the institutions on the list, making it still the world leader in STEM. But things change when we look at the number of such institutions per million of national population (plotted in the bar chart below). Then the USA ranks only 13th. The top six countries/regions become Hong Kong (with 4 institutions), Singapore (with NTU and NUS), Sweden (with 3 institutions), Australia (with 7 institutions), Switzerland (with 2 institutions), and the Netherlands (with Delft, Eindhoven, and Twente).

So where might one create the next Silicon Valley?

The San Francisco Bay Area has to work hard to compete with those locations! If the US truly wants to lead the world in STEM, it may need to lift its game a little. And a nation cannot be “great” in the modern era without excellence in STEM.

The University of Toronto has been mentioned several times on this blog. It is ranked 25th in the world on the Times Higher Education list of engineering institutions.

The university was founded in 1827, originally as a religious institution. Staff there have collected a number of Nobel prizes, and the university was also the site of Stephen Cook’s pioneering work on NP-completeness. Their solar car team (Blue Sky Solar Racing team) came 12th in the 2015 World Solar Challenge. 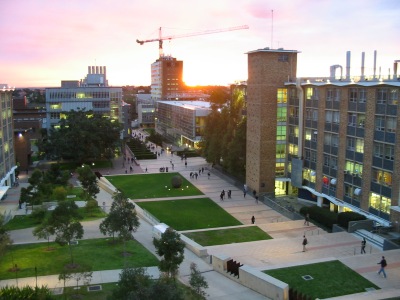 The University of New South Wales (UNSW) – located in the suburb of Kensington in Sydney – was founded in 1949. Its original focus was on engineering and technology, and it still excels in those fields, being ranked 68th in the world on the Times Higher Education list of engineering institutions. UNSW is home to the Sunswift solar car team, who came fourth in the 2015 World Solar Challenge Cruiser class in a beautiful solar sports car called eVe:

The Katholieke Universiteit Leuven (KU Leuven) was founded in 1425, 1834, or 1968, depending on your point of view. The original university was closed by the French in 1797, but a new State University was established under Dutch rule during 1816–1835. After Belgium became independent, the Catholic University of Leuven took over. Campaigns in the 1950s and 1960s demanding equals rights for Flemish Belgians led to a 1968 split of the university into the French-language Université catholique de Louvain and the Dutch-language KU Leuven.

KU Leuven states that “From its Christian view of the world and the human, KU Leuven endeavours to be a place for open discussion of social, philosophical and ethical issues and a critical centre of reflection in and for the Catholic community. KU Leuven offers its students an academic education based on high-level research, with the aim of preparing them to assume their social responsibilities. KU Leuven is a research-intensive, internationally oriented university that carries out both fundamental and applied research. It is strongly inter- and multidisciplinary in focus and strives for international excellence. To this end, KU Leuven works together actively with its research partners at home and abroad.”

The university certainly achieves its high-tech goals, being ranked 28th in the world on the Times Higher Education list of engineering institutions. It is home to the Punch Powertrain Solar Team (www.solarteam.be): 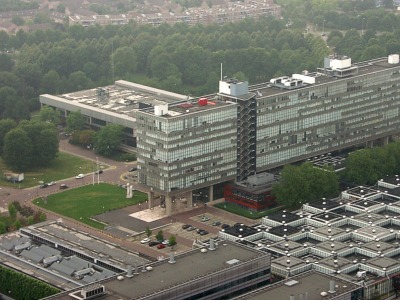 The Eindhoven University of Technology (TU/e) is one of the world’s premier technical institutions. It is ranked 62nd in the world on the Times Higher Education list of engineering institutions. I have been privileged to meet students from TU/e on a number of occasions, and they are among the best in the world.

TU/e was founded in 1956. The city of Eindhoven is home to Philips, DAF Trucks, and the High Tech Campus Eindhoven. Among other things, the university acts as a feeder school to those companies, and this requires both a practical focus and a solid basis in mathematics and theory.

TU/e is one of three Dutch technical universities (Delft and Twente being the others). All three run solar car teams, which showcase the students’ technical expertise. Eindhoven’s team has won the World Solar Challenge Cruiser class in both 2013 and 2015, with their “solar family cars” (see this article in IEEE Spectrum).

Eindhoven’s solar car Stella Lux at the 2015 World Solar Challenge, where it won the Cruiser class (my photo)

The University of Twente is located near Enschede, in the eastern Netherlands. The university has one of my favourite solar car teams, and is ranked equal 82nd in the world on the Times Higher Education list of engineering institutions. 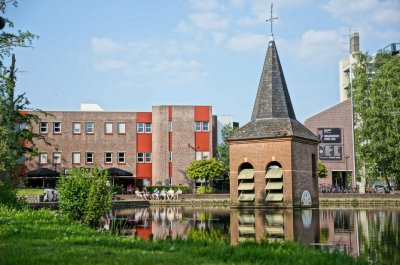 Artwork on the University of Twente campus (photo: “Daiancita”)

The University of Twente was founded in 1961 as the Technische Hogeschool Twente, joining similar technical institutions at Delft and Eindhoven. Today, the university teaches a number of subjects beyond Engineering, and the current name reflects this broader focus, which includes Health, Administration, IT, and Behavioural Sciences.

The University of Cambridge has been mentioned repeatedly on this blog. It is one of the oldest universities in the world – so old, in fact, that nobody is quite certain when it began (it seems to have been up and running by 1226, however). Cambridge is home to the Cavendish Laboratory, where many of the greatest scientific discoveries were made (the electron, the neutron, the structure of DNA, and more). Cambridge is ranked 4th in the world on the Times Higher Education list of engineering institutions. In the humanities, C. S. Lewis moved there from Oxford in 1954.

The university buildings are scattered across the city, which tends to confuse people. I can recall a tourist asking me, on a visit I once made to Cambridge, “Where on earth is the university?” 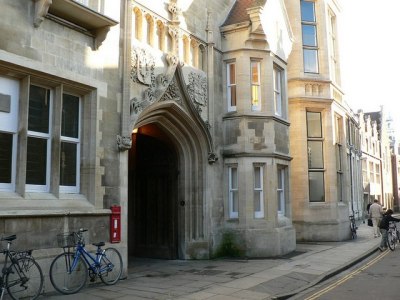 The university is also home to the Cambridge University Eco Racing team, which competes in the World Solar Challenge, and which fielded a rather unusual-looking design in 2013 and 2015:

The University of Michigan is ranked 17th in the world on the Times Higher Education list of engineering institutions. It is located in the small city of Ann Arbor, and has over 40,000 students, who are required to take race and ethnicity courses as part of their degrees.

Since its founding in 1817, university staff and alumni have collected several Nobel prizes. The university is also proud to have America’s number one solar car team: 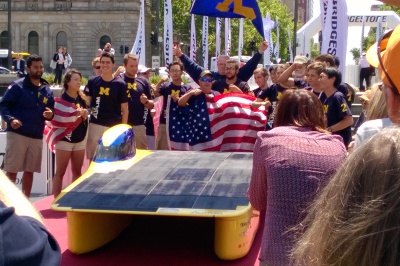