This year in science so far (click to zoom). Clockwise from top left:

The Wondiwoi tree-kangaroo (detail of an illustration by Peter Schouten)

National Geographic recently reported an interesting story about the Wondiwoi tree-kangaroo (Dendrolagus mayri). Until recently, this arboreal marsupial was known only from a single specimen collected in the Wondiwoi Peninsula of West Papua in 1928. It was thought to be extinct, and was listed on the “25 most wanted lost species” at lostspecies.org. But when an amateur expedition visited the dense mountain forests of the Wondiwoi Peninsula, there it was, living happily in the trees. A good-news story from the animal kingdom, for once.

Surprised to find kangaroos living in trees? There are a number of related species that do this, in the rainforests of New Guinea and northern Australia. In fact, members of the kangaroo family live in a range of different habitats (the rock-wallaby would be a less dramatic example).

This visualisation (revising an older post) shows the sizes of major Australian plant families, compared to world totals (based on slightly old data from here).

Australia’s 836 orchid species are only 3% of the world total, but Australia has 89% of the Goodeniaceae.

Plants illustrated include the Golden Wattle and Sturt’s Desert Pea. 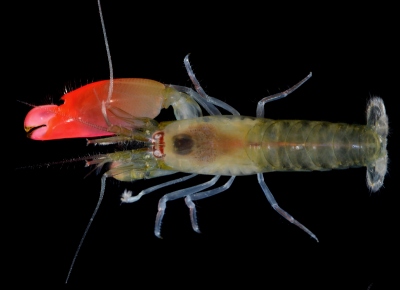 The Pink Floyd pistol shrimp, Synalpheus pinkfloydi (above, photo by Arthur Anker) is a recently described alpheid shrimp. As with other shrimp in this family, the snapping sound produced by the large claw is loud enough to kill small fish. The shrimp is described in a Zootaxa paper, which contains this wonderful line:

“Distribution. Presently known only from the type locality on the Pacific side of Panama; likely more widespread in the tropical eastern Pacific, but unlikely to occur on the Dark Side of the Moon due to lack of suitable habitat.”

And it keeps getting better. The Oxford University Museum of Natural History has also celebrated the discovery with the beautiful artwork below (Another Shrimp in the Wall, by artist and scientist Kate Pocklington).

In an at times acrimonious process (some have even called it a “wattle war”), the former plant genus Acacia has been split into five genera, with further splits likely. The XVIII International Botanical Congress in 2011 confirmed a previous decision to retain the Acacia name for the largest of the resulting genera, found mainly in Australia:

“Under the internationally accepted rules governing the correct naming of plants, the International Code of Botanical Nomenclature, the name would normally have remained with the African-American group, as this includes the species Acacia nilotica, which is the nomenclatural type species… However, a special provision of the Code allows for the name of the type species of a genus to be changed in cases like this, where strict application of the rules would require a large number of species to be renamed… An application under this provision was made in 2003… This was considered by the relevant botanical committees, who decided in its favour. The International Botanical Congress at Vienna in 2005 ratified this decision. The Vienna decision was contested by a group of botanists involved with African and American acacias. The Melbourne Congress, in two important votes on the first day of the Nomenclature Section, supported the procedure used in Vienna by a large majority. Support for this decision was widespread and not confined to Australian delegates. This vote effectively confirmed that the type species of Acacia is now an Australian species.”

The resulting division of the former Acacia is as follows:

The map below shows the distribution of the new genera, divided into the Americas, Africa, Asia, and Australia & the Pacific (background image from NASA Visible Earth). A degree of reorganisation was going to be needed whatever nomenclature proposal was accepted, but it certainly made sense to retain the Acacia name for 71% of the original species (although Wikipedia, which becomes more and more partisan as time passes, ran a campaign against the official decision for several years). The botanical community seems quite happy using the new names, and it does not seem that the issue will resurface at the XIX International Botanical Congress later this year, although there continues to be debate about how to resolve similar issues in the future.

Here are the five new genera, with examples:

About 13 species, in the Americas. See theplantlist.org.

About 15 species, in the Americas. See theplantlist.org. 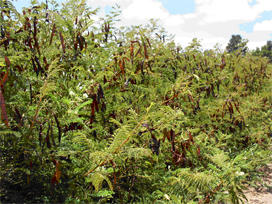 About 163 species, throughout the tropics. See theplantlist.org. 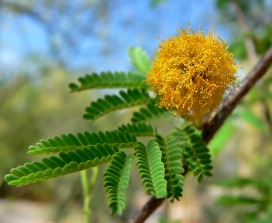 About 203 species, throughout the tropics. See theplantlist.org. This genus is likely to be split further.

About 987 species, almost all in Australia and the Pacific.

The Himalayan forest thrush (Zoothera salimalii – photo by Craig Brelsford above) is a newly described species of bird. It was formerly grouped with Z. mollissima, which breeds above the tree line. In contrast, Z. salimalii breeds in coniferous forests up to the tree line, from Tibet to Vietnam. In addition, Z. salimalii has a different song from its alpine cousin, as well as differing genetically. This is enough to make it a distinct species.

With improvements in technologies for DNA and other analyses, we are starting to see many such new species “carved out” of existing ones.