xkcd comments on the Spirit rover (click to zoom)

In 2004, I was privileged to visit Middle Earth (aka New Zealand) with a colleague and to present the paper “Network Robustness and Graph Topology.” A major event of that year was the landing of the Mars rovers Spirit and Opportunity. Intended to operate for 90 Martian days (92 Earth days), Spirit kept going until 2010 (as xkcd remarked on in the comic above) and Opportunity set a record by operating until 2018. Also in 2004, the Stardust spaceprobe collected some comet dust.

On a more sombre note, 2004 saw the Boxing Day Tsunami. In the field of technology, Facebook and Gmail both launched in 2004, and Vint Cerf and Bob Kahn shared the Turing Award (for having invented the Internet).

This was an excellent year for cinema. Examples from different genres include National Treasure, Troy, Van Helsing, Man on Fire, Hotel Rwanda, The Village, Howl’s Moving Castle, and The Passion of the Christ. I certainly have memories that I treasure.

On Tuesday 31 July (early evening in Australia, early morning in the US, 07:45 GMT), Mars makes its closest approach to the earth since 2003. The actual distance is provided by Wolfram Alpha.

The InSight Mars lander launched yesterday from Vandenberg Air Force Base in California, and is scheduled to land on Mars on 26 November. There, it will probe beneath the surface and check for “marsquakes.”

The sad story of the Mars Climate Orbiter reminds us all to use SI units.

The diagram above (click to zoom) and list below show currently active spacecraft in the Solar System, not including those operating close to the Earth (and I’ve probably missed a few):

The ESA/RFSA ExoMars lander seems to have crashed on Mars, unfortunately. The chart above shows the planned sequence of events (which was to have ended with a soft collision). Instead, we seem to have had an early parachute release, with a very brief use of thrusters, followed by loss of signal after 19 seconds – consistent with free-fall to the surface under Martian gravity.

Update: the crash site seems to have been identified. 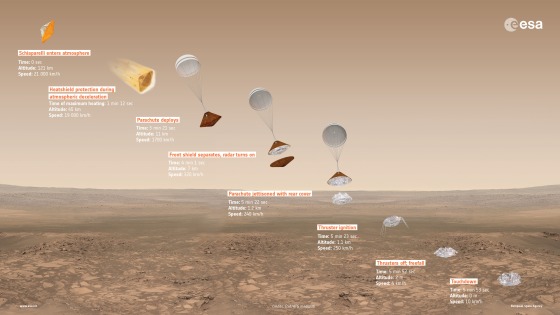 The ESA/RFSA ExoMars mission (see ESA image above) will launch its Mars lander tonight. The livestream is here. Hopefully we’ll see some great pictures and some good data as it lands on Mars!

Update: the landing seems not to have gone well, unfortunately. 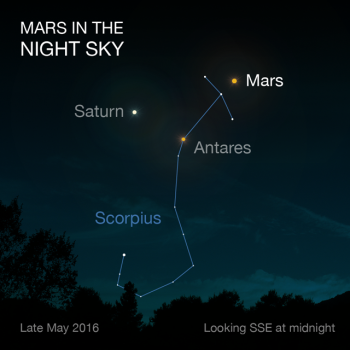 Mars is growing brighter in the sky, appearing close to the star Antares and the planet Saturn (see NASA image above). Later this month, Mars will reach the point of closest approach, and hence largest apparent size.

For the current distance to Mars, see Wolfram’s calculator or the live diagram of the solar system at Fourmilab, which includes images (green lines show orbits below the plane of the ecliptic):

Here is another gem from XKCD: surface areas of the various solid objects in the solar system – excluding the gasballs Jupiter, Saturn, Uranus, and Neptune, but including their moons (click to zoom). As might be expected from images of the planets, Earth and Venus have the lion’s share of the real estate: 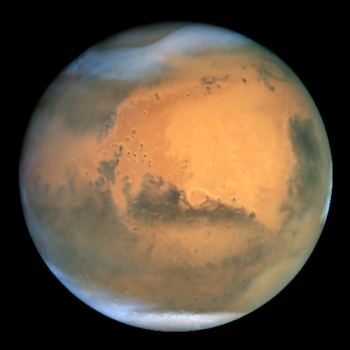 On April 8, the planet Mars was in opposition. That is, Mars was on the opposite side of the sky to the Sun. Also, on April 14, Mars will be at the closest point to Earth in its orbit (92 million km). A great time to observe the “red planet”!

This video from Slooh explains various aspects of the planet at length:

For the current distance to Mars, see Wolfram’s calculator or the live diagram of the solar system at Fourmilab, which includes images (green lines show orbits below the plane of the ecliptic):