Some feedback on my last post expressed surprise that Ptolemy’s specification of the Oikoumene now holds holds 80.6% of the world’s population. Above (click to zoom), I have redrawn the classic bar charts of world population which explain this fact. Africa, Asia, and Europe contain about 86% of the world’s population. Ptolemy excluded what we now know to be Southern Africa (which only drops the total to 85%) and didn’t extend his Oikoumene quite far enough to the east.

The chart below shows the same thing, but using NASA’s image of the Earth at night. It can be seen that the spikes on the bar chart correspond to major cities.

I was reading recently about the Geographia of Ptolemy (written around 150 AD). This classic book applied Greek mathematical skills to mapping and map projection – and if there was one thing the Greeks were good at, it was mathematics. According to Neugebauer, Ptolemy believed the Oikoumene, the inhabited portion of the world, to range from Thule (63° North) to 16°25′ South, and 90 degrees East and West of Syene in Egypt.

The map above illustrates this Oikoumene, with a modern population overlay in red (data from SEDAC). Ptolemy was not too far wrong – today this region holds 80.6% of the world’s population, and the percentage would have been greater in antiquity.

Also shown on the map are some of the many cities listed in the Geographia. Open circles show Ptolemy’s coordinates (from here, adjusted to a Syene meridian), and filled circles show true positions. Ptolemy had reasonably good latitude values (an average error of 1.2° for the sample shown on the map), but much worse longitude values (an average error of 6.8°). The longitude error is mostly systemic – Ptolemy’s estimate of 18,000 miles or 29,000 km for the circumference of the earth was only 72% of the true value (several centuries earlier, Eratosthenes had come up with a much better estimate). If Ptolemy’s longitudes are adjusted for this, the average error is only 1.5°.

However, Ptolemy’s book deserves considerable respect – it is not surprising that it was used for more than a thousand years. 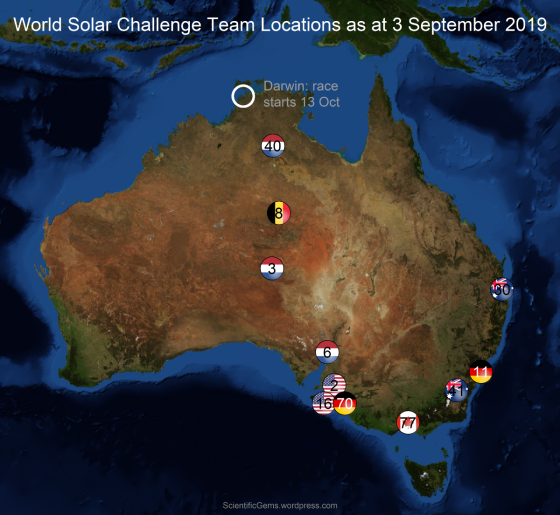 In the leadup to the 2019 Bridgestone World Solar Challenge in Australia this October, most cars have been revealed (see my recently updated illustrated list of teams), with JU’s reveal a few days ago (see below), and Tokai’s reveal due in a few hours.

There are now 9 international teams in Australia (more than the number of local teams). Eindhoven (#40), Agoria (#8), and part of Vattenfall (#3) are driving north to Darwin, while Top Dutch (#6) have a workshop in Port Augusta (and living quarters in Quorn).

The chart below shows progress in submitting compulsory design documents for the race. White numbers highlight eight teams with no visible car or no visible travel plans:

In the leadup to the 2019 Bridgestone World Solar Challenge in Australia this October, most cars have been revealed (see my recently updated illustrated list of teams), and the first few international teams (#2 Michigan, #3 Vattenfall, #6 Top Dutch, #8 Agoria, and #40 Eindhoven) have arrived in Australia (see map above). Bochum (#11), Twente (#21), and Sonnenwagen Aachen (#70) are not far behind. Eindhoven (#40) are currently engaged in a slow drive north, while Top Dutch (#6) have a workshop in Port Augusta (and living quarters in Quorn).

Meanwhile, pre-race paperwork is being filled in, with Bochum (#11) and Twente (#21) almost complete. Sphuran Industries from India (#86) is not looking like a serious entrant. On a more positive note, though, Jönköping University Solar Team (#46) is revealing their car later today!

Following on from my route map above for the World Solar Challenge (click to zoom), here are some personal route notes (revised from 2015 and 2017). The WSC has confirmed that the control stops are as indicated.

The graph below (click to zoom) shows approximate altitudes (taken from the Stanford 2013 elevation profile for this version of the graph). The highest point on the route (about 730 m) is 20 km north of Alice Springs, although the steepest hill (Hayes Creek Hill, summit 203 m) is about 170 km from Darwin.

The city of Darwin marks the start of the race. 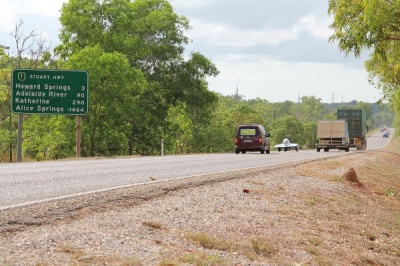 The town of Katherine (on the Katherine River) is a gateway to Nitmiluk National Park. It also serves the nearby Royal Australian Air Force base. The average maximum October temperature is 37.7°C. 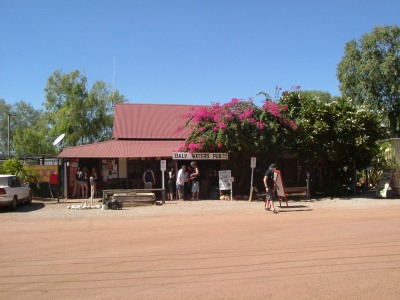 Daly Waters is a small town with a famous pub. The Eindhoven team left a shirt there in 2015.

Dunmarra once served the Overland Telegraph Line. Today it is little more than a roadhouse, motel, and caravan park. In previous races, this was a control stop. 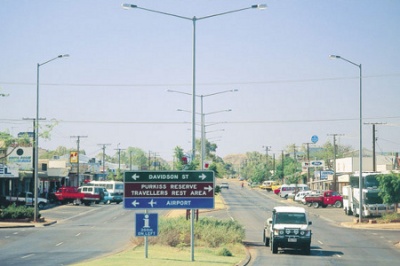 Tennant Creek (population about 3,500) is a small town serving nearby mines, cattle stations, and tourist attractions. Shopping can be done at Tennant Creek IGA.

For 2019, Tennant Creek marks the end of Cruiser Stage 1. Cruisers must arrive between 14:00 and 17:00 on Monday (with penalties for arriving after 14:00). Cruiser teams will spend the night, and have the option of metered recharging between sunset and 23:00. 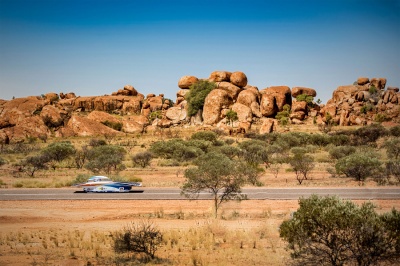 The 1,802 hectare Karlu Karlu / Devils Marbles Conservation Reserve lies along both sides of the Stuart Highway about 100 km south of Tennant Creek. It is home to a variety of reptiles and birds, including the fairy martin (Petrochelidon ariel) and the sand goanna (Varanus gouldii). Race participants, of course, don’t have time to look (unless, by chance, this is where they stop for the night).

Barrow Creek once served the Overland Telegraph Line and nearby graziers, but is now nothing but a roadhouse. The Telegraph Station is preserved as a historical site. 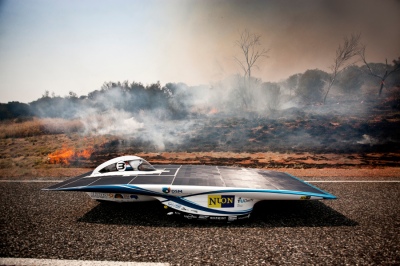 Ti Tree is a small settlement north of Alice Springs. Much of the local area is owned by the Anmatyerre people. In previous races, this was a control stop.

Alice Springs is roughly the half-way point of the race. 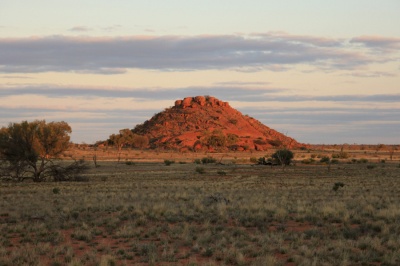 Kulgera is a tiny settlement 20 km from the NT / SA Border. The “pub” is Kulgera’s main feature. 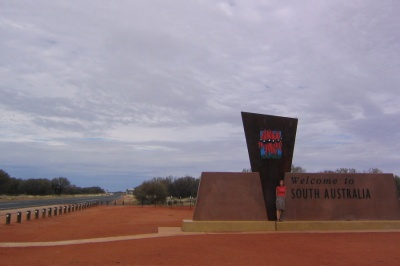 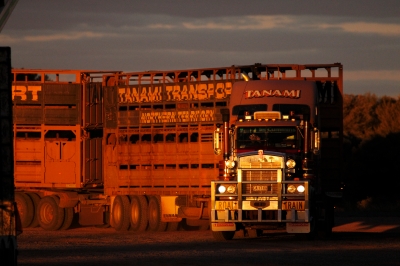 Marla (population 100) has a health centre, a roadhouse/motel/supermarket complex, a police station, and a small car repair workshop. The name of the town may be a reference to the mala (Lagorchestes hirsutus) or to an Aboriginal word for “kangaroo.” 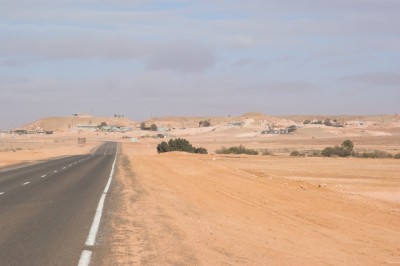 The town of Coober Pedy is a major centre for opal mining. Because of the intense desert heat, many residents live underground.

For 2019, Coober Pedy marks the end of Cruiser Stage 2. Cruisers must arrive between 16:30 and 17:00 on Wednesday (with penalties for arriving after 16:30). Cruiser teams will spend the night, and have the option of metered recharging between sunset and 23:00. 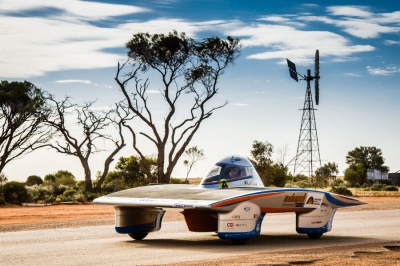 Glendambo is another small outback settlement. 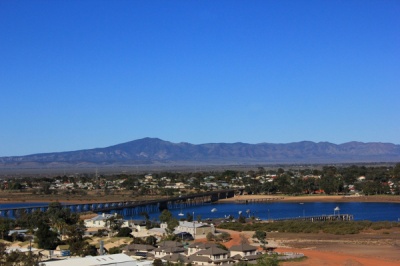 At Port Augusta, the highway reaches the Spencer Gulf. From this point, traffic becomes much heavier, which makes life more difficult for the drivers in the race.

Adelaide makes quite a contrast to that lengthy stretch of desert (photo: “Orderinchaos”)

Adelaide, the “City of Churches,” is the end of the race. The official finish line marks 3,022 km from Darwin. 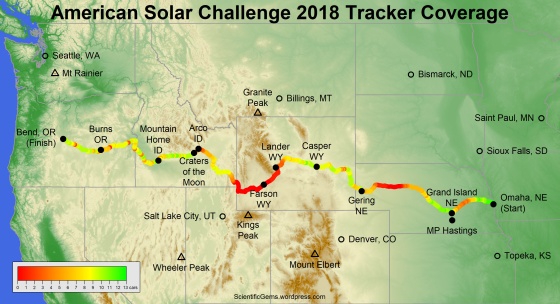 I just got my hands on the GPS tracker data for the American Solar Challenge last July. Out of the 13 cars from Michigan, MIT, CalSol, Western Syd, Illini, Waterloo, Minnesota, GA Tech, Poly Montreal, ETS Quebec, Bologna, W Mich, and App State, most were not being tracked during large stretches of the route (see the map above). That restricts what I can do with the data, but I will do something. Stay tuned.

Because of my interest in social statistics, I’ve been exploring county-level results from the US 2016 presidential election. The map below (click to zoom) summarises the results (blue for Democrat and red for Republican, coloured according to how strongly counties voted one way or the other). Nine of the more extreme counties are highlighted.

Most of the variance in this data can be explained by demographic factors such as race, age, education levels, local unemployment, rural-urban continuum code, and median household income. The latter is particularly interesting, and the chart below provides a summary.

On a scale from −0.5 being 100% Republican to +0.5 being 100% Democrat, the curve shows the average vote of counties by 2016 median household income (where the averages are weighted by county population sizes, and LOESS smoothing is used to draw the curve). Overlaid on the diagram is a bar chart for the total population of different median household income groups (the scale for this bar chart is on the right).

It can be seen that, at the very poorest end, votes are balanced between Democrat and Republican. For example, here are the 7 poorest counties in the United States, by median household income. They are all rural:

Above that bottom end, votes trend Republican, with the peak Republican vote occurring at median household incomes around $40,000. Above about $56,000, counties swing Democrat, and the Democrat vote increases with increasing wealth. For example, here are the 4 richest counties in the United States, by median household income. They are all part of the Baltimore–Washington metropolitan area:

Essentially, the Republican Party seems to have become the party of the poor, particularly the rural poor. Indeed, the (population-weighted) median of 2016 median household incomes for Democrat-majority counties was $61,042; while for Republican-majority counties it was $52,490 ($8,552 less). For a visual perspective, the map below limits the previous one to counties with a 2016 median household income below $56,000. It is precisely because the Republican Party has become the party of the rural poor that these maps are mostly red. I had not fully appreciated this before analysing the data (although others have), but it certainly explains much of recent politics in the US. However, predicting the results of the next presidential election would require some solid demographically linked polling data as well as a good voter turnout model.