Last year I blogged this poster of solar racing basics. Things have changed slightly, but I think it might still be useful for new teams. Here are the 10 posts explaining it: 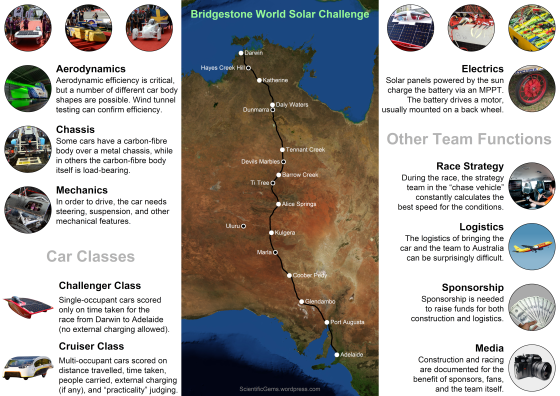 ). They are Australia’s third Challenger Class team (and rising), having first participated in WSC 2017. The photograph shows their 2019 car (left) and the symmetric 3-wheeler they built for the cancelled 2021 event (right). This is a great team and a credit to their university; I wish them well as their prepare their car for the 2023 event. They are currently recruiting new team members.

The 1968 film 2001: A Space Odyssey suggested that we would have extensive space flight in 2001. That turned out not to be the case. What we did get was the September 11 attacks on the USA and the military conflicts which followed. Nevertheless, NASA commemorated the film with the 2001 Mars Odyssey orbiter.

Films of 2000 included the superb The Lord of the Rings: The Fellowship of the Ring, several good animated films (including Monsters, Inc., Shrek, and Hayao Miyazaki’s Spirited Away), the wonderful French film Amélie, some war movies (Enemy at the Gates was good, but Black Hawk Down distorted the book too much for my taste), the first Harry Potter movie, and an award-winning biographical film about the mathematician John Nash.

In books, Connie Willis published Passage, one of my favourite science fiction novels, while Ian Stewart explained some sophisticated mathematics simply in Flatterland.

Saul Kripke (belatedly) received the Rolf Schock Prize in Logic and Philosophy for his work on Kripke semantics, while Ole-Johan Dahl and Kristen Nygaard (also belatedly) received the Turing Award for their work on object-oriented programming languages (both these pioneers of computing died the following year).

The year 2001 also saw the completion of the Cathedral of Saint Gregory the Illuminator in Armenia, which I have sadly never visited.

After a summer break, this blog is active again. Here is a video retrospective of the recent Solar Challenge Morocco from champions Twente:

And here is one from Delft (formerly Vattenfall Solar Team, now Brunel Solar Team), who are modifying their car for the planned race in South Africa: