For people asking “Where are the pictures of China’s Zhurong rover?” – it’s still early days. Above is a timeline comparison with NASA’s Perseverance. Testing processes take time – Perseverance did not start driving until 15 days after arrival. And apparently Zhurong’s initial uplink speed was only 16 bit/s.

As I understand the schedule, Zhurong will roll off the lander on 22 May, and the rover and lander will photograph each other on 27 May.

Update #1: the Zhurong rover has now established a higher-bandwidth uplink via the Tianwen-1 orbiter, so sending photos taken by the lander is now technically feasible.

Update #2: photographs have now been released (rover on left and view down descent ramp on right): 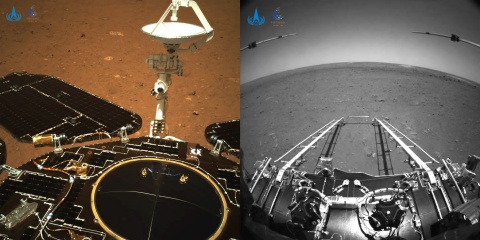