Having discussed the “David Fewchuk Spirit of the Event” Award in the Bridgestone World Solar Challenge, I should say something about the CSIRO Technical Innovation Award as well. After all, technical innovation in sustainable transport is what the Bridgestone World Solar Challenge is really about. I should also note that, in the four races 2013–2019, Punch Powertrain (now Agoria) Solar Team have won the award twice.

The Belgian car Indupol One finished sixth in 2013. It won the CSIRO Technical Innovation Award for its 3D-printed battery pack, which facilitated cooling of the 429 cells inside (I cannot find a photograph of the pack itself).

Punch Powertrain (now Agoria) won the award again in 2017 for their Geneva drive system to activate four-wheel steering. This allowed them to yaw the car during crosswinds, thereby gaining forward momentum by “sailing.” Blogger MostDece posted an illustrated explanation of the design at the time. Ironically, the regulations for 2021 have been altered to rule out such a design in future. 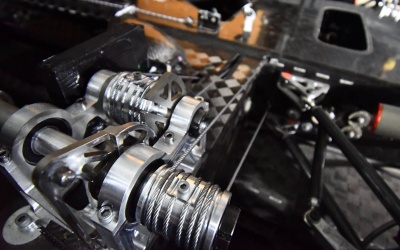 Kogakuin finished fifth in 2019, in spite of crashing twice due to strong winds (see their dramatic after-race video here). They won the CSIRO Technical Innovation Award for their hydropneumatic suspension, which allowed height adjustment of the vehicle (see it in action here).

Stanford came fourth in 2013, after a tough battle against Twente for third. This famous TEDx talk by Rachel Abril illustrates their spirit.

In 2015, UiTM EcoPhoton Solar Racing Team suffered a devastating battery fire. At Alice Springs, a group of Cruiser-class team members were having a stage stop, and helped with overnight repairs of the car (mostly from UNSW and Minnesota, I understand, plus some people from Bochum, Eindhoven, and Kogakuin, together with some WSC officials and some solar car alumni travelling along with the race as spectators). If I recall correctly, Adem Rudin (a University of Minnesota Solar Vehicle Project alumnus) accepted the award on behalf of the whole group, and the award was retained by EcoPhoton.

In 2017, Nuon (now Vattenfall) Solar Team won the Challenger class, but was also awarded the “David Fewchuk Spirit of the Event” Award for their “professionalism, team spirit and technical excellence.”

Sonnenwagen Aachen won the award in 2019 for not giving up in the face of all kinds of trouble. They stopped for five hours to repair their car on the Wednesday, just before Coober Pedy, after the car was blown off the road. There was another stop between Glendambo and Port Augusta, due to a broken shock absorber that had been damaged in the crash (Western Sydney Solar Team kindly helped get them back on the road). They wound up finishing sixth, and they also won the Safety Award. Ironically, the regulations for 2021 have been altered to rule out such a quick return to the road in future. 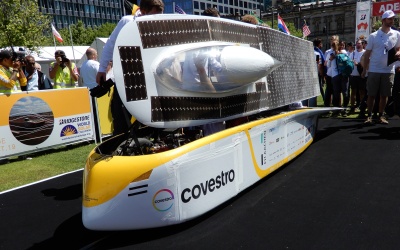 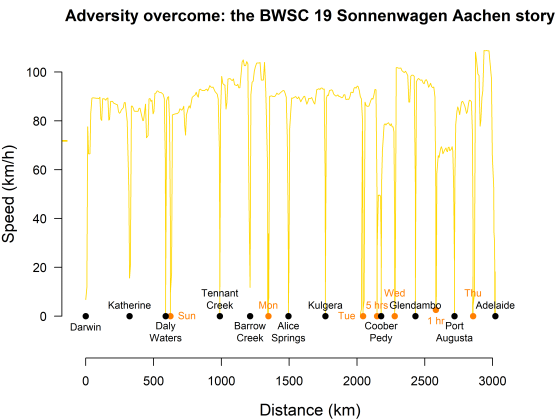 It is Mars Close Approach again. Check Fourmilab Solar System Live for what the solar system looks like right now (and see the image above). Wolfram Alpha will calculate the distance for you (62,070,000 km right now).

Or check the actual night sky. “The Finger points / At an Eye blood-red,” as Anne McCaffrey wrote in Dragonflight.