A 16-year-old TikTok user called Gracie Cunningham recently went viral with two short videos (second video here) asking questions about mathematics. Like a few other people, I thought that they were sufficiently interesting to answer.

1. How did people know what they were looking for when they started theorising about formulas? Because I wouldn’t know what to look for if I’m making up math.

Well, first, contrary to your comment “I don’t think math is real,” mathematics is indeed real. Even if the universe was completely different from the way it is, mathematics would still be true. Edward Everett, whose dedication speech at Gettysburg was so famously upstaged by Abraham Lincoln, put it like this: “In the pure mathematics we contemplate absolute truths, which existed in the Divine Mind before the morning stars sang together, and which will continue to exist there, when the last of their radiant host shall have fallen from heaven.” (OK, not everybody has this view of mathematics, which is called “Platonism,” but in my opinion, it’s the only view that explains why mathematics works).

Second, mathematics is discovered, not invented. The great mathematician G. H. Hardy pointed out “that mathematical reality lies outside us, that our function is to discover or observe it, and that the theorems which we prove, and which we describe grandiloquently as our ‘creations’, are simply our notes of our observations.” When you embark on a journey of discovery, you don’t know where you’ll end up. That’s what makes it exciting. When the early Polynesians set off in canoes across the Pacific, thousands of years ago, they didn’t know that they would discover Hawaiʻi, Samoa, and New Zealand. They just headed off into the wild blue yonder because that was the kind of people they were.

Now the Babylonians and others developed mathematics primarily because it was useful – for astronomy (which you need to decide when to plant crops) and engineering and business. But the Greek started to do mathematics just for fun. They discovered mathematical truths not because they were useful, but simply because, as Joel Spencer, put it, “Mathematics is there. It’s beautiful. It’s this jewel we uncover” (quoted in The Man Who Loved Only Numbers, p 27).

It is also worth pointing out a subtle kind of prejudice (almost a kind of racism) that is widespread – many people think that the ancients were primitive. They weren’t. They had plumbing, and architecture, and astronomy. They even knew about zero. Some of them were very smart people. There were Babylonian versions of Albert Einstein, whose names are now long forgotten. There were many Greek versions of Albert Einstein (including Archimedes, among others). I kind of wish that schools would teach young people more about what the past was actually like. If people learn anything about the past at all, it’s usually from popular literature:

2. Once they did find these formulas, how did they know that they were right? Because, how?

Short answer: Euclid. Around about his time, the Greeks started to ask themselves exactly that question, and developed the concept of rigorous mathematical proof as an answer. The fact that typical mathematics classes don’t introduce simple proof is yet another indication of how badly broken modern education is. Even this simple visual proof (uploaded by William B. Faulk; click to view animation) gets the idea across: 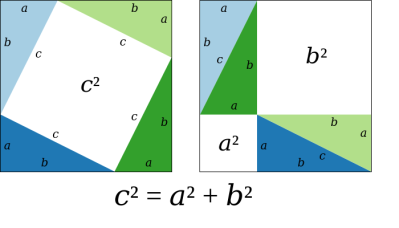 3. Why is everyone being really mean to me on Twitter? Why are the only people who are disagreeing with me the ones who are dumb, and the physicists and mathematicians are agreeing with me?

Second, as Dunning and Kruger famously pointed out, it is the people who know the least that are the most confident.

Third, the original video was in teen-girl English, with multiple uses of the word “like” (I have a sneaking suspicion that this was deliberate). Using teen-girl English for a “serious” subject like mathematics makes people’s heads explode (this will be useful to know when you have your first job interview).

But thank you, Gracie, for asking some really good questions.

Some follow-up remarks on what mathematics is not are here.