Sometimes the model is just wrong. Alchemists linked the metals to the planets (for example, because copper was mined on Cyprus, and that’s where Venus was born). They were incorrect.

A recent meme asked for “fictional books” that have influenced one. I’m not sure if it’s what they meant, but the obvious ones for me are the infamous Necronomicon of Abdul Alhazred, and Copper, Silver, Gold: An Indestructible Metallic Alloy by Egbert B. Gebstadter (my illustration above). 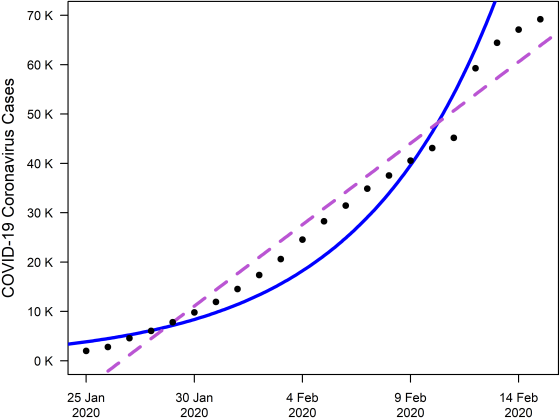 Above is a chart of worldwide cases of the COVID-19 coronavirus disease (data from here, skipping the first few days). The apparent spike in cases on February 12 is due to a change in how cases are diagnosed and reported.

There does not seem to be the exponential growth in cases that one would expect (see the badly-fitting blue curve), except at first. In fact, allowing for the “false spike,” growth seems to be almost linear (see the dashed purple line). This would probably be due to under-counting (the Chinese medical system can only diagnose a certain number of cases each day), although it offers some hope that quarantine measures may be working. Let us pray that they continue to work.

I was thinking recently about the alignment (in the Dungeons & Dragons sense) of fictional scientists (see diagram above).

I was brought up on the Famous Five children’s stories by Enid Blyton. Perennially popular, even though flawed in certain ways, these novels star a rather grumpy scientist called Quentin (who had more than a little to do with my own desire to become a scientist). Quentin is certainly altruistic:

“‘These two men were parachuted down on to the island, to try and find out my secret,’ said her father. ‘I’ll tell you what my experiments are for, George—they are to find a way of replacing all coal, coke and oil—an idea to give the world all the heat and power it wants, and to do away with mines and miners.’
‘Good gracious!’ said George. ‘It would be one of the most wonderful things the world has ever known.’
‘Yes,’ said her father. ‘And I should give it to the whole world—it shall not be in the power of any one country, or collection of men. It shall be a gift to the whole of mankind—but, George, there are men who want my secret for themselves, so that they may make colossal fortunes out of it.’” (Enid Blyton, Five On Kirrin Island Again, 1947)

However, Quentin works for no organisation (barring some government consulting work) and draws no regular salary. He is clearly Chaotic Good.

Long before Quentin, Victor Frankenstein in Frankenstein (Mary Shelley, 1818) created his famous monster out of selfishness and hubris. However, he also desires to make things right, so Frankenstein seems to me Chaotic Neutral.

On the other hand, the experiments of Doctor Moreau in The Island of Doctor Moreau (H. G. Wells, 1896) mark him as Chaotic Evil. The same is true of the scientist Rotwang in the movie Metropolis (1927), who is the prototype of the evil “mad scientist” of many later films – in contrast to good “mad scientists” like Emmett “Doc” Brown in the Back to the Future movies (1985, 1989, 1990).

In all cases, however, there seems to be a bias towards portraying scientists as Chaotic. This is a little strange, because the organisational structures, processes, and rules governing science in the real world are better described as “ordered” or Lawful (in the Dungeons & Dragons sense). Perhaps chaotic characters are just more fun?

Not that everyone follows all the rules and procedures of course. When I take the What is your Scientific Alignment? test, my personal alignment comes out as Neutral Good.

The preliminary list of teams registered so far for the iLumen European Solar Challenge at Circuit Zolder in Belgium (18–20 September) has now moved to here (pictures have also been updated).