Two cars had lower practicality scores than when they last appeared: 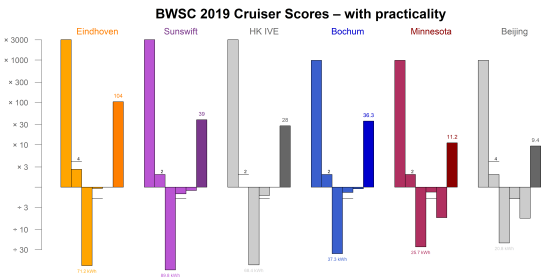 The chart above (click to zoom) shows final Cruiser scores (including practicality) in the style of my previous chart. The score is calculated as a product S = D × H × (1 / E) × P × 0.99l. The chart shows the components of the score on a logarithmic scale, so that multiplying and dividing score components corresponds to adding and subtracting bars. For each team, there are 6 bars (the 6th bar, in a darker colour, is the total score):