By special request, here is another day in the life post, this time for Swiss solar car team Solar Energy Racers (SER). The day is 29 September, the last day of the Sasol Solar Challenge. I am relying on information from a blog by SER strategy person Georg Russ, together with GPS data screen-scraped off the race tracker by a friend, and elevation data from the Shuttle Radar Topography Mission. As before, the horizontal axis of the chart represents distance.

The day began at Swellendam, and the team drove to the control stop at Bredasdorp, stopping there for 30 minutes the first time (it can be seen from the chart that SER was not quite so good as Nuon at maintaining a consistent speed). The team drove two loops, the first of them to Cape Agulhas (the southernmost point of the African continent, and the site of a picturesque lighthouse). It can be seen from the chart that they had to stop on the way (to repair a loose left rear wheel fairing – with duct tape, of course). 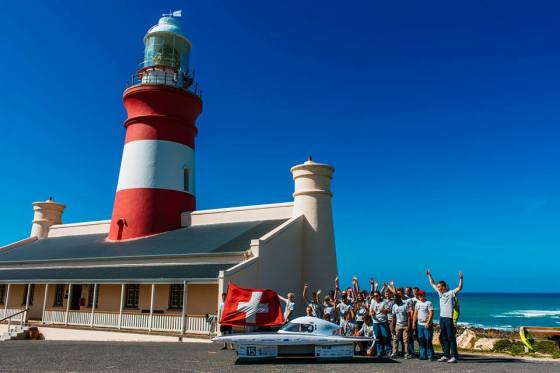 The team completed one more, shorter, loop, before heading on to the finish at Stellenbosch (Nuon drove that shorter loop three times). Knowing when to quit driving loops was an important strategy decision. The chart highlights the hilly nature of that final leg (going through part of the Cape Fold Belt), as well as some stops to change drivers.