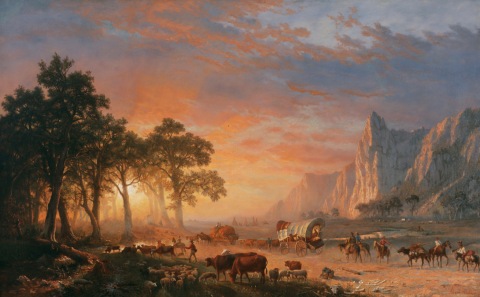 Emigrants Crossing the Plains, or The Oregon Trail, Albert Bierstadt (1869)

Given that the American Solar Challenge is going to be following the Oregon Trail this year, I thought that it would be fun to do a comparison between the “prairie schooners” of two centuries ago and the solar cars of today.

At the time of the “Great Emigration” of 1843, aluminium was known, but could not yet be produced on an industrial scale (that came in 1854, and was initially very expensive). Steel likewise existed, but the Bessemer process for producing it came later (1855). Fibreglass composites came a century later (1936), and carbon fibre later still. Modern electronics could not even have been imagined. The “prairie schooners” were built using a much older technology.