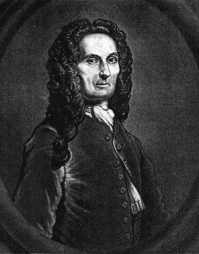 On 26 May 1667, Abraham de Moivre was born. This French mathematician gave us, inter alia, the formula named after him:

De Moivre was born to French Protestant parents. When the Edict of Nantes was revoked, he was imprisoned for his beliefs for several years, after which he was allowed to leave for England. De Moivre made important contributions to probability theory, and was a pioneer of analytic geometry. Sadly, he was unable to get a university position in England, and he died in poverty.