The anti-vax community runs regular scare campaigns regarding “toxins in vaccines.” Mercury and formaldehyde are the two most often mentioned. Mercury occurs in the form of the antibacterial thiomersal (thimerosal), but not in vaccines routinely administered to children. Thiomersal is present in multi-dose vials (not in single-use vials) of influenza vaccine, typically at a level of 25 micrograms (0.025 milligrams) per dose. For comparison, though, the normal mercury intake is about 2410 micrograms (2.41 milligrams) per year, so an annual “flu shot” adds very little extra. And even that exaggerates the risk, because thiomersal breaks down into ethylmercury, which is less dangerous than other forms.

Formaldehyde, though toxic in moderate to large quantities, is naturally produced and consumed as part of human metabolism, with a turnover of about 50 grams of formaldehyde per day for a person weighing 50 kg. Formaldehyde occurs naturally in blood at levels of about 2.6 milligrams per litre. Even for a 3.5 kg newborn baby (with 85 mL/kg of blood), that comes to 0.77 milligrams of formaldehyde (and there’s more in body tissue). Vaccines contain at most 100 micrograms (0.1 milligrams) of formaldehyde, and so add very little to the blood (and that is very quickly eliminated). That’s even more true for older children, with their much greater blood volume. 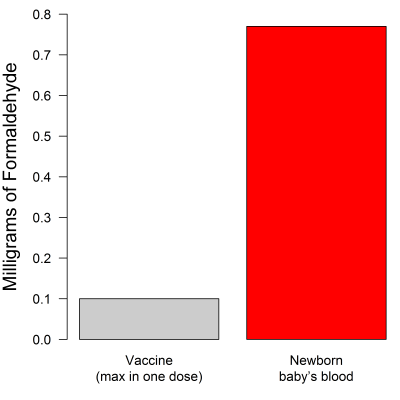 Part of the problem here, I suspect, is widespread confusion between grams, milligrams, and micrograms. At the other end, of course, some people also have problems in economics with understanding the difference between millions, billions, and trillions.