Above are progressive delegate counts in the US Primary elections (data from www.nytimes.com, not yet including the results of two very close contests in Missouri). Below are the ratios between counts for the top contenders. Clinton is consistently getting three delegates for each of Sanders’ two and has, with “superdelegates,” pretty much got the Democrat nomination sewn up, it seems to me.

Cruz has been consistently getting more than double Rubio’s count, so it’s not surprising that Rubio has pulled out. Cruz was briefly eating into Trump’s lead, but has fallen back again – so Trump now seems likely, though not certain, to get the Republican nomination. 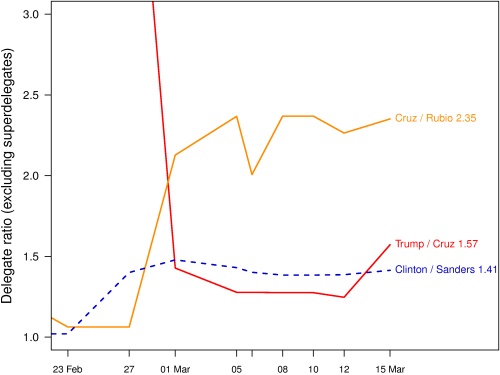