I’ve been wondering about the meaning of car numbers in the World Solar Challenge (see table above). Nine of them I understand:

The Swedish team (46) and the Korean team (82) have used their national telephone prefix as a car number.

In a closely related choice, Eindhoven’s number (40) is their telephone area code.

The Hong Kong IVE team takes their number (33) from the fact that the Hong Kong Vocational Training Council was founded 33 years ago.

Minnesota’s number (35) has been in use since its very first car (Aurora I, which raced in 1993). According to a comment made on this post, the number is taken from the route of that first race, which roughly followed Interstate Highway 35. Another story is that it was the first car’s speed (35 mph).

Kanazawa’s car is version 5.1 in their series of cars, and they have chosen the car number 51 to match. 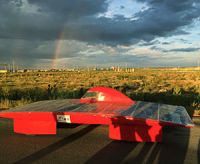 I assume that the Chinese team has chosen number 80 because it is lucky. 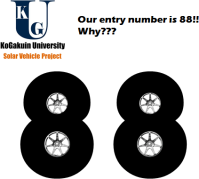 In the team’s own words: “Our team number is 88. Why?? There are several reasons for that. 4 wheels looks like 88. 88 is the lucky number in Japanese character (kanji). And also, the address of our team garage is Hachioji city. ‘Hachi’ means ‘eight.’”

I have no idea what the meaning of most of the car numbers from other teams might be – although I could guess at a few. I’d welcome explanations in the comments!