The World Solar Challenge Cruiser class, for “practical” solar vehicles, has these 12 entries this year:

symbol for detailed team profiles, or on the team social media icons for more information. 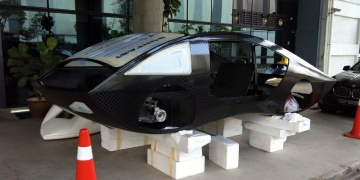 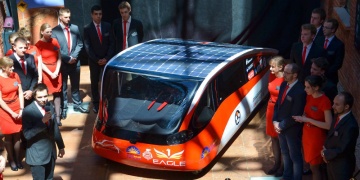 What makes the Cruiser class interesting is that there are different design philosophies that can win. In 2013, Solar Team Eindhoven fielded a futuristic “family car,” while the University of New South Wales / Sunswift fielded a sleek two-seater “sports car.” Here are the 2013 Cruiser class results, calculated according to the formula in the rules (each bar on the left is the sum of the four bars corresponding to the components):

This year, the formula is:

But that was then; this is now. Bochum has fielded the exciting-looking “ThyssenKrupp SunRiser,” Eindhoven has updated their vehicle (see below), and the field has increased from 8 entrants to 12. Anything can happen!