icon marks teams that are already in Australia (43 teams).

symbols are clickable and lead to detailed team profiles, and the team social media icons (

etc.) are also clickable. Some of the returning teams have switched classes from their previous entry and, sadly, some of the teams from 2013 (such as the Swiss and the Italians) are not competing this year. To the teams that are competing, best of luck!

And here, for memory’s sake, are the timings from 2013. Will the Dutch dominate again this year? 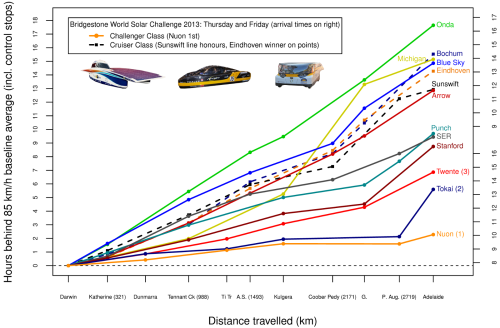 Finally, this photo (by Jorrit Lousberg) shows Team Nuon in the outback two years ago. This is what it will be like: