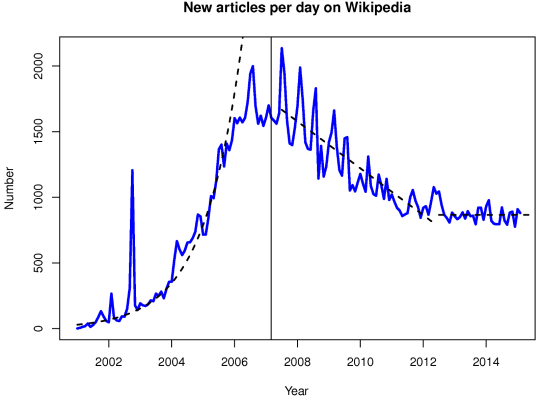 I have previously blogged about Wikipedia being in trouble. However, revisiting the English Wikipedia statistics page, I see that (at least in purely quantitative terms) the decline of Wikipedia may have halted.

The chart above shows the number of new articles per day on the English Wikipedia. During its first five years, this number grew exponentially, but switched to a linear decline in mid-2007. Recently that decline seems to have halted, with an average of 866 new articles per day over the past two and a half years (see here for examples of recent articles). The statistics on the number of active editors tell a similar story.

Whether Wikipedia’s quality problems have stabilised is another story, of course, but it looks like Wikipedia will not be vanishing any time soon.