It’s Halloween time, at least in the USA. There have been some interesting carved pumpkins around with scientific and mathematical themes, like Nathan Shields’ interpretation of “Pumpkin Pi” above. The legendary Will Gater also excelled himself last year, and Lenore Edman produced a great “DNA-o-lantern” a few years ago (photo below).

Greetings to everybody who celebrates the day! 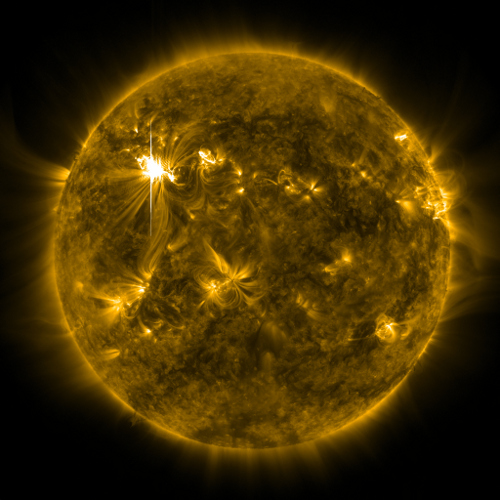 This UV image from March 2012 (taken at 17.1 nm) shows a large solar flare (bright spot at upper left). It also gives a fantastic view of the solar surface generally. Thanks, NASA!

I recently read The Lassa Ward: One Man’s Fight Against One of the World’s Deadliest Diseases by Ross Donaldson. Donaldson was a medical student working in Sierra Leone, fighting Lassa fever with the late Dr. Aniru Conteh at the Kenema Government Hospital.

Donaldson’s story touches on some of the same public health challenges as the recent Ebola outbreak in West Africa. It therefore sheds some light on that ongoing medical crisis, as well as reminding us that Ebola is far from being the only medical problem in that part of the world. This fascinating and somewhat disturbing memoir is well worth a read.

“We soon pulled off the road and parked next to a small porch, where an anemic light guarded a few empty tables. As we sat down, our driver greeted the waitress. ‘How dee body?’ he said in a singsong timbre. ‘Dee body fine,’ the woman replied with a welcoming smile. I tried to follow the pair’s conversation in Krio, Sierra Leone’s official language, but could identify only a few words of the English-based dialect that freed slaves had brought back to Africa.

… From the moment I had first heard about the dreaded Lassa virus, during my second year of medical school in a sterile California classroom that now felt very far away, I had been drawn to the illness. The disease is one of four famed VHFs (including Ebola, Marburg, and Crimean-Congo hemorrhagic fever) that share a terrifying tendency to spread from person to person, as well as a gruesome clinical picture of massive bleeding frequently leading to death. … During that time, Lassa became a symbol to me of something different, of foreign adventure and unquestionable need.” 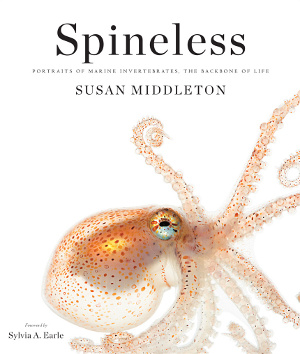 Here is a beautifully illustrated book to look out for: Spineless: Portraits of Marine Invertebrates, the Backbone of Life, by Susan Middleton.

I have no review, but here are some of the lovely images from the book. Wired and the Smithsonian Magazine have more. It looks fantastic!

The Society of Biology has announced the winners of their 2014 amateur photography competition, which included some fantastic entries by young photographers. Click the camera image below to see the gallery, or read the story in Wired.

While the ongoing Ebola outbreak continues to be of very great concern, there is some good news concerning cases outside Africa. In the chart below (updated from my past post), circles represent evacuated medical or other personnel, while squares represent other cases, including the three nurses infected by caring for patients (also, recovered patients are shown in green, and deaths in black):

Teresa Romero, the Spanish nurse, appears to be virus-free and recovering (hopefully the two US nurses will also recover quickly!). The chart also shows that (outside Africa):

While it is a terrible disease, Ebola does not seem to be as infectious as some people in the US fear.

In other good news, Nigeria is officially Ebola-free. However, Guinea, Liberia, and Sierra Leone are still seeing a total of 100 or more new cases each day. Help is still urgently needed there, as this map by Mikael Häggström highlights:

Update 1: The chart at top has been updated with recent news.

Update 3: Unfortunately, Mali has reported its first case of Ebola, and an American doctor recently returned from West Africa has tested positive for Ebola in New York.

Continuing the amphibian theme from the last post, here is one of the cards from my geographical educational card game, showing a public domain image of the beautifully coloured Near Eastern fire salamander, Salamandra infraimmaculata:

The Gallica digital library in France has recently uploaded this beautifully illustrated natural history of frogs by August Johann Rösel von Rosenhof (1758). It is also online at the Université de Strasbourg, and some of the images are on Wikimedia Commons as well. The quote from Virgil in the image above (“Admiranda tibi levium spectacula rerum”) translates roughly as “Regard with wonder that which the smallest of creatures display.”

The Rosetta spacecraft, which has been giving us such lovely pictures of comet 67P/Churyumov–Gerasimenko, has picked a landing site for the Philae probe. The probe is due to land on November 12, and is likely to tell us some interesting things about comets. The video below is from NMANewsDirect. 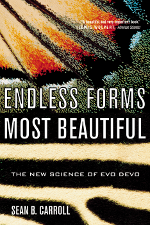 Endless Forms Most Beautiful by Sean B. Carroll (2005)

I recently read, somewhat belatedly, Endless Forms Most Beautiful by evolutionary developmental biology pioneer Sean B. Carroll (the title derives from a line in On the Origin of Species: “from so simple a beginning endless forms most beautiful and most wonderful have been, and are being, evolved”).

This well-written book provides an excellent explanation for how a toolkit of genes like the Hox genes (see image below) control embryonic development in animals. The discovery of these genes shows that fruit flies, starfish, and people are more closely related than was once believed.

These genes work by producing proteins which in turn control the expression of other genes, in what is effectively a kind of computer program that can be visualised (and Endless Forms Most Beautiful contains several lovely colour plates which confirm this).

Photo: Caitlin Sedwick (from this paper)

The book includes chapters on the Cambrian explosion, melanic forms (such as black panthers), and the formation of spots on butterfly wings: 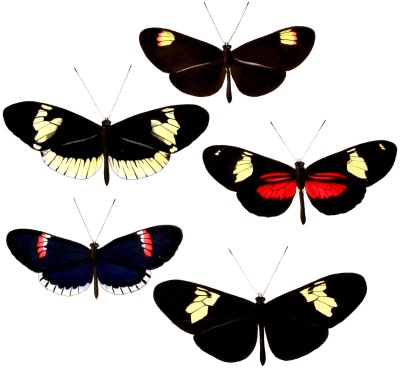 Carroll concludes with a plea for teaching more evolutionary biology in schools. Personally, I think a greater priority would be an increased emphasis on teaching ecology, given the serious consequences which human activities (even well-meaning ones) can have for the planet. However, that quibble does not stop me from recommending this book to anyone who has not read it yet.

Endless Forms Most Beautiful by Sean B. Carroll: 3½ stars