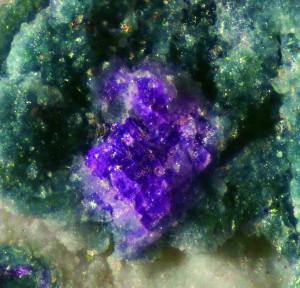 Geologists in Australia have discovered a new mineral, putnisite (photo above by P. Elliott, G. Giester, R. Rowe, and A. Pring).

Related minerals include strontianite: SrCO3, celestine: SrSO4, and the purple stichtite: Mg6Cr2CO3(OH)16·4H2O, which was also discovered in Australia (photo below by Didier Descouens). 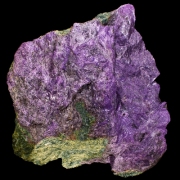 Putnisite was found at Lake Cowan, near Norseman, Western Australia, and was named after Münster-based mineralogists Andrew and Christine Putnis. The discovery was published earlier this year. Peter Elliott, the lead author of the paper, is a visiting research fellow in the School of Earth and Environmental Sciences at the University of Adelaide, as well as a research associate with the South Australian Museum.

I’m sure that the Museum would love a specimen for their collection (photo below), although the crystals of putnisite found so far are in fact almost microscopically small. 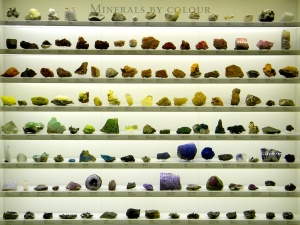 1 thought on “Putnisite, a new mineral”