Our previous kitchen chemistry post discussed esters. Fats and oils (triglycerides) are an important special case of esters. The alcohol in triglycerides is glycerol, a “triple alcohol” with three OH groups:

The glycerol combines with “fatty acids” (like the one on the right) which resemble acetic acid (left), but with a much longer hydrocarbon chain hanging off the COOH group:

Fatty acids have important dietary implications, and they can be classified in dietary terms, but the most common classifications are chemical. The three main chemical classifications all refer to the presence of carbon-carbon double bonds:

One important classification is in terms of the number of carbon-carbon double bonds:

The position of carbon-carbon double bonds is also significant. A common classification counts the position of the first double bond, starting from the “omega” end of the molecule (the end furthest from the oxygen atoms). For example, there are omega-3, omega-6, and omega-9 fatty acids:

Finally, the orientation of double bonds is very important. In cis fatty acids, there are two hydrogen atoms on the same side of the double bond, giving a molecule with a “kink.” In trans fatty acids, the two hydrogen atoms are on the opposite sides of the double bond, giving a straight-line molecule (trans fats are usually synthetic, resulting from the partial hydrogenation of vegetable oils). Since the straight-line molecules tend to stick together, “trans fats” (made from trans fatty acids) tend to be solid at room temperature, while “cis fats” (made from cis fatty acids) tend to be liquid – that is, oils (such as olive oil) rather than fats: 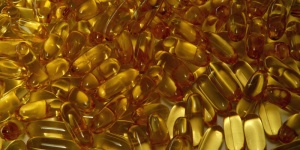 In contrast, trans fats are particularly unhealthy, and should be eliminated from the diet completely. This can be difficult in the USA, since pre-packaged foods there often contain trans fats (because of their long shelf life). Monounsaturated and polyunsaturated oils are also preferable to solid saturated fats.