The acetic acid in vinegar is an acid, though not a strong one. Being an acid means that it splits into positively charged hydrogen ions and negatively charged acetate ions. Hydrogen ions are hydrogen atoms without electrons, usually written H+ (although in practice they hitch a ride with water molecules). As a reaction, CH3COOH → CH3COO− + H+:

The presence of hydrogen ions is the sign of an acid, and the stronger the acid, the more hydrogen ions. The strength of an acid is measured by the pH value, where 7 is neutral, 6 is a weak acid, and 1 is a very strong acid (numbers above 7 indicate alkaline substances). Indicator paper (photo below) is often used to determine the pH of a liquid:

However, an extract of red cabbage also does the job (photo below by “Supermartl” – acids with pH 1, 3, and 5 in the tubes on the left; neutral water with pH 7 in the fourth tube; and alkaline solutions on the right):

A common kitchen reaction is to mix vinegar with baking soda (sodium bicarbonate, NaHCO3), causing the bicarbonate to break up into carbon dioxide gas and water (photo by Kate Ter Haar):

Any other acid (citric acid, for example) would also do the job, of course, since hydrogen ions are doing the work. Sodium ions (sodium atoms with an electron missing, Na+) are left over, together with acetate ions from the vinegar, and these form sodium acetate (also the subject of a home experiment). Another common home experiment with vinegar is dissolving the shell of an egg.

In 1953, the BBC filmed a train ride from London to Brighton. They repeated this in 1983 and 2013, which makes for a very interesting comparison (hat-tip to Gizmodo):

Science and Religion: Are They Compatible? by Daniel C. Dennett and Alvin C. Plantinga

I recently read Science and Religion: Are They Compatible?, a brief (77 page) record and extension of a 2009 debate between atheist philosopher Daniel Dennett and Christian philosopher Alvin Plantinga. Many books of this kind exist, but this one is better than most, since both participants think and write quite clearly on the topic.

In a sense, the compatibility between Science and Religion is an obvious empirical truth. Science began in the Age of Cathedrals. The philosopher Alfred North Whitehead suggested that “the greatest contribution of medievalism to the formation of the scientific movement … must come from the medieval insistence on the rationality of God” (Science and the Modern World, p. 15). Even today, a significant number of scientists in the West are Christian (about 30%, according to this study). Globally, there are also very substantial numbers of Muslims and Hindus.

In this book, Plantinga (p. 2) re-focuses the question on the compatibility between, on the one hand, generic Christianity (as defined in, for example, C.S. Lewis’ Mere Christianity) and, on the other hand, evolutionary theory (the “hot topic” of recent centuries). Even here, the existence of believers in theistic evolution seems to make the compatibility an empirical truth. C.S. Lewis once wrote “I believe that Christianity can still be believed, even if Evolution is true.” A recent poll in the US found the following beliefs among college graduates and postgrads (N = 269):

Plantinga argues (p. 4) that the only evolutionary concept incompatible with Christianity is the idea that mutations are “unplanned and unintended” (theistic evolution, of course, takes mutations to be divinely guided), but that truly random mutations are not actually essential to the theory. In support of this, Plantinga (p. 6) quotes Ernst Mayr: “When it is said that mutation or variation is random, the statement simply means that there is no correlation between the production of new genotypes and the adaptational needs of an organism in the given environment” (Toward a New Philosophy of Biology, p. 99). Dennett agrees (p. 26) with the compatibility between evolution and theistic belief (though himself denying theism for other reasons), and also agrees (p. 29) that evolution does not require mutations to be truly random. As evidence of this (p. 30), Dennett points at computer simulations of evolution, where things evolve in spite of the use of pseudorandom number generators which are, in fact, completely deterministic.

Having so quickly come to agreement on the main topic, much of the book is concerned with naturalism in Science and with the rationality of religious belief in general. Plantinga attempts (p. 19) an interesting argument suggesting that atheistic evolution gives no foundation for Science, in that we have no reason to believe that the beliefs in our brains are true (merely that they are adaptive). Dennett disagrees strongly here (p. 35) arguing that evolution has made our brains “highly reliable truth trackers.” It’s not at all obvious to me that this is true (we may well have evolved, for example, to have false but beneficial beliefs about other people), and Dennett provides little real argument for his position here (referring primarily to his other books on the topic).

Dennett goes on to argue (p. 31) that “naturalism is tacitly assumed … throughout scientific investigation.” He uses what is in my view a somewhat shaky courtroom analogy (courts will acquit a murder suspect if accidental death is a viable alternative, but do not “tacitly assume” that accidental death is the only option). If Dennett means metaphysical naturalism (as Plantinga does), his point is clearly empirically false, given the large number of religious scientists, and Plantinga points that out (p. 42, p. 63). If Dennett means methodological naturalism, it’s probably true, but not particularly relevant to the point being argued. Dennett’s response to Plantinga (p. 48) doesn’t really clarify the issue.

Towards the end of the book are arguments for and against the ideas of Michael Behe which I found less interesting (it might perhaps have been more interesting had Behe himself been involved, but there is probably little new to say about his ideas). The surprising thing about this book was discovering the extent of agreement on the main topic. On theism generally, Plantinga and Dennett were always going to have radically different perspectives, for reasons outside the scope of this book, and rehashing those perspectives provides few new insights. To quote Teilhard de Chardin, “after close on two centuries of passionate struggle, neither science nor faith has succeeded in discrediting its adversary.”

Plantinga’s final conclusion is that “there isn’t any conflict between Christian belief and science in the area we’ve been investigating. Christian belief and evolutionary science are entirely compatible. Perpetuating the myth that there is conflict, furthermore, is harmful both to religion and to science.” Dennett accepts this compatibility but denies that Plantinga has proved the stronger claim that “Science depends on theism to underwrite its epistemic self-confidence.” Neither author follows up on the question of how the myth of conflict might be harmful.

See also plurilogue.com, skepticfreethought.com, thinkingfaith.org, and The American Scientific Affiliation for other reviews of this book.

I recently got around to watching the 2009 film Angels and Demons. Like The Da Vinci Code, this is a very silly film, with both the science and the history being wildly wrong. Galileo’s condemned book was widely printed outside Italy, for example. Publishers of the day were too discreet to plaster BANNED IN ITALY! READ IT FOR YOURSELF! on the cover, but the controversy was nevertheless a publisher’s dream. Even today, the house of Elsevier (who originally printed the book) prides itself on the connection (see photo of Elzevir edition by Angelina Ward below). The book has also kept up with the times; it can be read electronically.

Galileo did not, as the film suggests, argue for elliptical planetary orbits. Kepler did that, and failing to believe Kepler was one of Galileo’s biggest mistakes (had he believed Kepler, Galileo knew enough mathematics to see what ellipses and parabolae had in common, and might have gone on to formulate a theory of gravity). 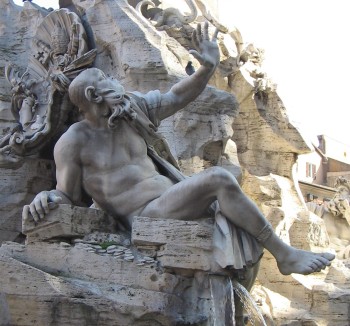 The movie gives the viewer some wonderful images of Rome, but here the facts are wrong too. Raphael was never buried anywhere but in the Pantheon, for example. The book tells us that “Bernini’s Fountain of the Four Rivers glorified the four major rivers of the Old World: The Nile, Ganges, Danube, and Rio Plata” – even though the Río de la Plata is in South America. And the list goes on. Among other things, Bernini did not place the “West Wind” marker on St Peter’s Square, nor is that marker distinct from the other fifteen:

“What’s new, Buenos Aires?
I’m new, I wanna say I’m just a little stuck on you.
You’ll be on me too…
And if ever I go too far,
It’s because of the things you are.
Beautiful town, I love you…
Río de la Plata, Florida, Corrientes, Nueve de Julio,
All I want to know…” – Evita

The NASA Astronomy Picture of the Day always has something spectacular. The picture above, from 21 December last year, shows a montage of images taken at different wavelengths by NASA’s Solar Dynamics Observatory. The wedges run from 170 nm (UV, shown in pink) through 9.4 nm (X-rays, shown in green), with the background image taken at visible wavelengths. Some of the wavelengths highlight features of the solar surface very well.

Update: NASA also has a beautiful video version of this image (hat-tip to sparkonit):

My recent series of kitchen chemistry posts has included:

As a brief change of pace, here are three books that might interest parents teaching children about science (links go to my reviews): 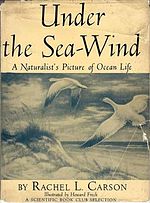 Under the Sea-Wind by Rachel Carson – a classic of nature-writing, written in 1941

The Elements by Theodore Gray – a beautifully illustrated picture-book on the elements, and a must-have reference 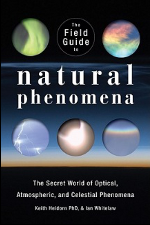 More kitchen chemistry posts in a week or so…

Today marks a year since this blog was begun. A great opportunity to look back, and to ask my readers: what else should I be writing about?